Long Eaton in Nottinghamshire was the venue of the annual BMAF National XC Relay Championships.

Despite each leg being only 3km and pancake flat, usually favouring track athletes, this year there was mud and water in abundance making conditions quite challenging to run fast.

The M65 team were first to run and Neil Hotson ran a storming 1st leg (6th fastest overall, 13.35) to put his team right up at the sharp end placing 4th with Salford Harriers at the helm.

Ed Connolly running above his usual 800m on the track hauled Southampton into a stunning bronze medal position (10th fastest overall, 14.45) but with Salford Harriers only 13secs adrift in 4th.

Chris Hibberd set off on the final leg quite conservatively and powered through the mud (9th fastest overall, 14.23) to increase their advantage over Salford and win a fantastic first National medal in that age category for Bronze.

The M55 team were quite optimistic beforehand of being amongst the sharp end come the finish and Jon Grainger did not disappoint.

Jon laid down the gauntlet on the opening leg with what turned out to be the fastest leg of the day (11.30) and a 4sec advantage over hot favourites Leicester.

John MacInnes had the toughest leg 2 of his life having to run from the front with the big clubs lining up behind.

Where others may have gone out too fast in the moment, John didn’t panic, kept his cool and despite dropping to 4th brilliantly ran his own solid race and kept Southampton in the medal hunt.

Noel O’Dowd set out on the penultimate 3rd Leg 38 secs down on 3rd place and paced his race brilliantly closing the gap throughout to halve the deficit to 19 sec.

Pete Costley had to use all his many years experience and tactical nous not to run too hard too early and paced it very well to run 6th fastest overall, 12.07. Despite gaining no ground on the bronze medal position at half way, the medal places were changing further up the field. Costley overhauled Shrewsbury with approx 1km left to run and at that point it was never in doubt as he brought  Southampton home for their 2nd Bronze medals of the day.

The M35 team ran extremely well to finish 11th of the 26 teams considering 60% of the team were running down in age from the M45-54 category.

In fact they were never lower than 11th place and were up to 8th during the race which more than goes to show this age group can compete with the best.

Matt Risden had his first race for a while after injury and got the team off to a good start with 11th place and the fastest Southampton time of the day (11.07).

The ever dependable David Blackman, one of 3 dropping down in age paced his race very well moving up one place to 10th with 11.39.

Jez Curtis ran very well and holding 10th place closed a lot of ground on the clubs ahead running 11.27.

Jim Bennett, another dropping down age and gradually getting fit again hauled Southampton to a fantastic 8th with 12.22.

Howard Long running against athletes nearly 20 years his junior ran a great last leg to bring Southampton home for 11th place and only one place down on their best ever finish of 10th from 2017. 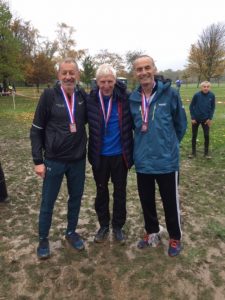 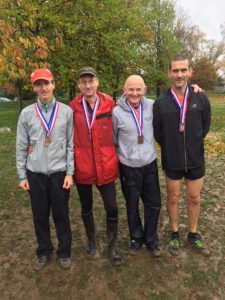 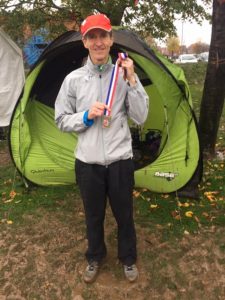 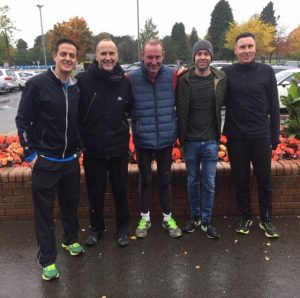