10 Southampton AC U11’s represented their county at the regional U11 sportshall finals in Burgess Hill on Sunday.This provides the first opportunity that children have to represent their county at athletics and the club represented more than a third of the Hampshire team of 29 with all the individual event winners coming from the club.

The Hampshire girls team achieved their best result at this event for some time coming joint 2nd on the day.

The Hampshire boys team were 5th.

See below picture of the full 29 strong Hampshire team including the 10 young athletes from Southampton AC. 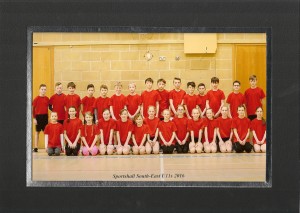 Also see below for full results for the girls.