The club had great success in the young athlete age groups at the Hampshire road relays championships at Lakesdie North Harbour in Cosham, Portsmouth on Sunday.

For the U11’s, the boys took the individual and team title with Lars Feyerabend-Powell winning the individual race and Theo Abbt who was 3rd and George Lambert who was 6th joining him the win the team race.  For the girls Keira Bessant was 3rd in the individual race and joined forces with Emily Churcher and Claudia Hargreaves to win the team race.  Celia Brabazon was 6th, Anya Woolvine 8th and Milly Hulbert 15th to take 3rd place in the team event as the b team.  Picture of winning U11 boys & girls team (minus Claudia who had to leave straight after race). 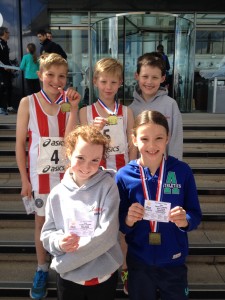 The U13 boys fielded a very strong team to take the team title by over a minute.  Ben Brown ran the fastest leg of the day and was followed by Tommy Brammer who was 6th fastest and then Matt Dyer who was 2nd fastest.  Nathan Travers was 112th and James Moore 13th for an incomplete team.  Picture of the winniong U13 boys team below. 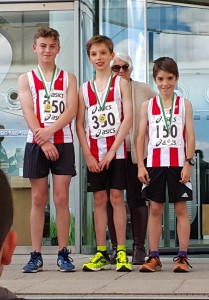 The U13 girls were 2nd behind a very strong City of Portsmouth team.  Elizabeth Adamson ran the 3rd fastest leg of the day, Megan Hulbert the 6th and Olivia Reavey the 7th and see below for picture of the girls after the race. 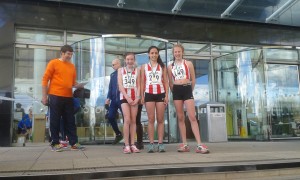 The U15 boys were also 2nd in the team race with Toby Hale also running the 2nd quickest individual; leg.  He was ably backed up by Max Satterly who ran the 4th quickest leg and Ben Williamsd who ran the 7th and see below picture of the boys after the race. 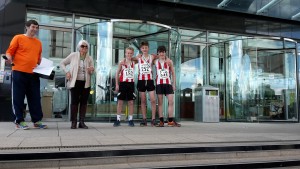 The U15 girls took the bronze medal in the team race with Aimee Rayner running the 6th quickest leg, Isabelle Bennett the 8th and Grace Reavey the 12th quickest.  See below for picture of the girls. 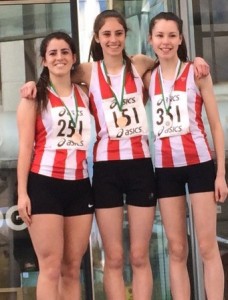 The U17 men & women and senior women were busy competing elsewhere but the club did field a senior mens team who were 4th ion the day with Ashley Forbes running the 4th quickest leg, Steve Marcer the 15th and Jon Hannan the 16th.

The over 40’s men fielded two teams with the a team coming home 4th.  Dave Blackman ran the 5th fastest leg of the day, Pete Davis the 9th and Michael Tanner the 17th.  The b team were 5th, with Jim Bennett, Greg Warder and Rob Ralls running the 11th, 12th and 13th quickest respectively.

The mens over 60’s team were 3rd with Sid Delara running the 4th quickest leg, Richie Pearson the 8th and Pete Haynes the 9th.

Full results through link the Hampshire athletics website below.